Q: My daughter has always loved going to school, but this year, something has changed. Many mornings, she complains about stomach aches, headaches or nausea. I’ve actually kept her home, thinking she was sick. But as soon as she knows she’s staying home, she perks up.
On other mornings, she simply refuses to go to school. If I’m actually able to get her in the car, she has a meltdown, and I end up turning around and taking her home. At this point, she’s missed too much school, and I’m at my wits’ end. How can I help my kid who refuses to go to school?

About 5% of children avoid school, either by complaining that they’re sick or simply refusing to go altogether, according to the American Academy of Pediatrics.

Of course, most kids don’t want to go to school every single morning. But, for some, the idea of walking into their classrooms is terrifying. Kids who refuse school can be worried about everything from failing an assignment and using a public bathroom to verbal taunts from other children, physical threats and actual injury, according to the AAP.

And while it may be tough to do, there’s really only one way to resolve the issue, said Phyllis Fagell, school counselor, therapist and author of “Middle School Matters:” You have to get them to school.

“School refusal is a form of anxiety, and all anxiety responds to exposure,” Fagell said. “The worst thing you can possibly do to a kid who refuses school is to keep them at home.”

When you allow your child to skip school because of anxiety, you’re essentially legitimizing their fears. You’re telling them that you also don’t think they can handle the stress of a school day and are reinforcing that there’s something to be afraid of once they get there.

“Whatever their fear is, you want to validate it because feelings are always valid and they won’t calm down and hear anything you say if they don’t feel validated,” Fagell said. “But then, they have to go to school.”

As any parent with a child who is experiencing school refusal can tell you, however, getting out the door, into the car and into the classroom isn’t easy. Fagell laid out four steps parents can take to get their kids in school before the bell rings.

Find out what’s holding them back

For some kids, school refusal is a passing problem. Fagell worked with one third grade boy who didn’t want to go to school after two other boys rejected him at a birthday party. “I was able to tell him that, in this case, those two boys were the ones who were so concerned when he didn’t show up and they really wanted to see him,” she said. “That was a very easy one with a defined reason.”

For other students, school refusal is just another example of how anxiety is permeating their lives. In those cases, Fagell recommends finding a therapist who can help the child learn strategies to cope.

To get your child back into the classroom without a struggle, you’ll need support from school staff and a carefully crafted plan. “What we want to do is work up the exposure to get them fully walking into school on their own,” Fagell said.

“At some point, the child is walking on their own and doing it all on their own,” she said. “The idea is that those smaller exposures will desensitize them to the fear that’s keeping them out.”

Get them on board

For a successful entry back to school, you’ll need to get your child’s buy-in. “You want them to be a partner in the process,” Fagell said. “Most kids don’t want to be afraid of going to school forever. They want to work toward those goals.”

Once they do reach a goal—even a small one—celebrate it, she said. Positive feedback is important.

Remember, it’s not about you

When kids are acting out because of anxiety, it’s important to remember that they aren’t refusing to go to school to irritate you or make you late for work.

“Go from thinking that this is intentional behavior intended to be provocative,” Fagell said, “to understanding that this is an involuntary subconscious response to the brain inaccurately perceiving threat.”

And, she said, to overcome it, they’ll need your support and compassion.

“Give themopportunities to take smaller risk in other parts of their life. Risking taking is a muscle, and the more you exercise it, the stronger it gets. You can build that risk-taking muscle a lot of different ways. For, example, invite someone over to a playdate who you are a little nervous about asking.”

“Is there anything about the out-of-school environment that makes it extra tempting to stay home? Make home as school-like as possible. No unfettered access to screens of any kind and no sleeping or lounging in bed unless genuinely sick. Be clear that if your child or teen does not attend school, you will be collecting all screens and/or turning off data and home wifi. Then follow through! Ask the school to send work for your child to complete during the day or to provide a tutor at home.”

Don’t focus on the symptoms 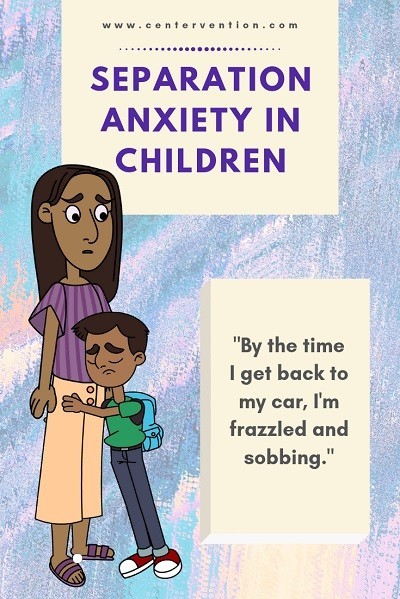 Separation Anxiety in Children: Ideas and Advice from Experts